Whilst I can certainly understand that y’all can hardly wait for the next “expoit” with whom I’m planning for you to meet, it’s going to have to wait until next week.

You see old pappy’s got me doing a bunch of research, and since I still mouth a lot of what I’m reading which makes me hungry and needful of stopping for a doggie biscuit regularly, this stuff takes time!  Anyway, I hope you enjoyed hearing about that fascinating young French dude, Tom Piketty, last week and I promise to bring you another special character next week.

For now, I have only a couple “parties of interest” to mention.  Do you remember back in Blog #18 (on the Fourth of July) when I reminded you of Ike’s warning about the Military/Industrial Complex?  Well, it’s apparently “gone about as far as it can go” (as in the old “Oklahoma” song)!  Seems as though we now have the F-35 Lightning II aircraft which was supposed to be operational by 2010, having been grounded during testing 13 times since 2007, nowhere near finished.  This baby with estimated development costs already doubling to $400 billion is supposed to replace aging planes for the Airforce, the Navy and the Marine Corps, but its technological challenges are making it unclear if it will ever fly.  Here’s the real kicker — the program has become too expensive to give it up!  Our ever-vigilant legislators, not wishing to lose their own cushy jobs, are reluctant to sacrifice the 133,000 jobs in 45 states which the project is currently supporting (and forecast to grow 260,000 jobs if it ever gets to full-scale production).

So, here we have a defense contractor who has, as the Big Banks who learned from that famous real estate dude and former presidential aspirant have already done, discovered how to be “Too Big To Fail!!”

Harking back again for a moment to old Blog 18 — as stated there — we have many REAL BIG problems here in the good old U.S. of A which are going to take some very drastic actions if they are to be corrected.  The one action described in Blog 18 — reinventing the “draft” is essential on several fronts, not the least of which is getting the poor kids off the streets!  I’ve included a (somewhat “sick”) cartoon below, lifted from pap’s favorite mag, to illustrate how dysfunctional our big cities have become (it of course also speaks to the dysfunctionality of our “justice” system, but that’s another story).  Our govamints’ primary answer to poor kids’ plight in our inner cities has been to merely keep them drugged, but this solution isn’t working very well as the “toon” points out.  My solution; the draft, will give these kids something to look forward to, something to live for!  If you doubt this potential go back to the early forties when young men were being drafted to go to war.  Of course they were terribly naive, but if a fellow received a classification precluding him from serving, he would be very depressed.  The reason — he wanted to help his country, just like his friends and relatives who were accepted.  This was a good variety of patriotism, unlike the BS being promoted by so called “conservatives” today. 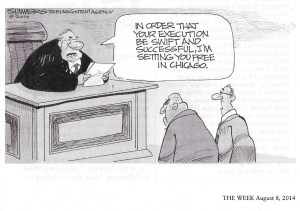 Onward to the “news.”  Old pappy wanted to check the weather one morning, and he caught the “Today” show, with hundreds of bystanders cheering, heaven knows for what.  Anywho, the “news” teams began with the fires and flash flooding in California, quickly moved on to the Ebola infected Doc and Missionary brought back to Atlanta for treatment, continued through Toledo’s tainted water from an algae bloom on Lake Erie, a missing Mom in Oregon, tropical storms bearing down on Hawaii, and the terrible rise in bacon prices.  Of course, the “reporting” of all these dire events was heavily interspersed with ads imploring watchers to “ask your doctor!”  Finally, the “gang” cheered up markedly when the sports person announced that “football” was back!!

Oops, forgot to mention the “closet heist” wherein a lady in a very large house with a gigantic closet and numerous alarm systems had a bunch of her junk stolen anyway.  She was shown appropriately tearing…………….is inequality good?  It ain’t even good for those with too much money!

With that sobering news, we should end this blog on a high note as well.  Old pap read where “millenials” are the most fiscally conservative generation since the Great Depression.  I’m thinking, “they better darned well be “fiscally conservative” since their grandparents and parents are planning to leave them nothing but DEBT!” (This of course refers to the 99%)

Hang in there kiddos, I’ll be back next week with a little tutorial on our fascinating “stock” markets.

So, until then, y’all take care, and, for goodness sakes, turn off that danged Telly!!

PS:  This just in!  Good old Paul Krugman yesterday had a little piece in the Times entitled “Inequality is a Drag.”  The gist of his story is that severe inequality (of income) is actually a drag on economic growth.  He cites those stellar sources, the IMF and Standard & Poor’s, for his evidence.  I’ll bet you a dollar to a donut that he didn’t read all 700 pages of Tom Piketty’s little tome, either.