IMPORTANT NOTE: As was recommended back in Blog #8, The Financial Sector, posted on April Fools’ Day, 2014, you may want to brew a large pot of coffee, and keep a little Southern Comfort chaser nearby, when you embark on this little diatribe from old pap and me!

WARNING: If this blog posting appears to be a tad convoluted, that’s because it is intended to be so – reflective of our present society and the greater world currently surrounding us.

WE, THE ENABLERS……..Our message for the week!

Gads, it might appear to a visitor from outer space that a near-total lack of consideration for others has become our Amurican “way.”

Last week, in my blog #39, Scotus, Potus, Politics old pap and I tried to point out the utter dearth of compassion displayed by both sides in the controversy over gay “marriage.” Well, we dear old Amuricans don’t seem to be amenable to seeking logical solutions to any of our other disputes and problems either.

Presently, we’re experiencing mass murders on a very regular schedule, and recently one disgruntled fellow even did a selfie of his murder of a couple of former co-workers. Recent polls show 38% of us believing the most effective way to prevent the rash of shootings is for more citizens to carry guns for protection, while 46% think gun control laws would be more effective. So, apparently, there isn’t much agreement about what to do about this disaster!

Further complicating matters, are recent murders of police officers by crazed persons apparently feeling victimized by the authorities. Law enforcement officers are said to be fearful of doing their jobs as a result of being ostracized by the media, etc. for their inadvertent killings of unarmed black persons.

We’ve made a “litany of trivia” below to demonstrate further the unraveling of civil behavior amongst our population:

Jeff Bezos says he doesn’t recognize the “soulless, dystopian,” and ruthless work culture at Amazon described in a New York Times article. A vivid example of our gigantic, sometimes near monopolistic, marketing of products made in foreign lands by basically slave labor, and shipped from Jeff’s (and other’s) warehouses to provide “same day” delivery to his eager customers. Seems to be lots of human abuse to pamper impatient consumers.

BTW, our voracious consumerism seems to be one product we are still able to export to the rest of the world – the sad Chinese, having thousands of years of calm culture, must now follow their leaders’ advice to move to a more consumption based economy.

0  Oh, gracious sakes, old pap is always regaling me with tales of our wondrous electronic age:

For instance we have this outfit called “Uber” which allows people to share their automobiles by giving others rides. It’s said that these arrangements are far superior to taxicabs, and Uber doesn’t have to deal with any of those messy details such as employee taxes, “benefits,” or workmens’ compensation insurance, and such. Of course, the people sharing their vehicles probably aren’t considering the wear and tear and how they will afford to replace their conveyances once depreciated. Another facet of this “sharing economy” is the ability of people to rent out their homes or rooms therein, and “tech” companies such as Airbub and Uber only skim a third of the revenue off the top. My old pappy thinks these situations are reminiscent of the Great Depression, when folks rented out the kids’ bedrooms to try to keep the mortgage paid.

Golly Ned, if a little old fashioned adultery happens to be in your mind, there is that nice website, “Ashley Madison,” to facilitate your hankerings. Unfortunately, some mean old “hackers” exposed Ashley’s members, causing embarrassment to many, and adding insult to injury, it turns out the mostly male members were being tricked and were only conversing with computers. Gee, Josh, what a bummer, and just to be romancing a sexy sounding “bot!”

Here’s a beauty for ya: Gaming has become a spectator sport! Talk about sheer nonsense – Simple minded souls all over the world are now watching other idiots play these goofy games – well, at least, computer games are only virtual violence! But really, people need to get a life.

Hey, if you really have too much time on your hands, join the crowds. Recently, for the first time, 1 billion people…..roughly 1 out of every 7 brave souls on earth…logged on to Facebook in a single day. Recent research has found that people who incessantly check their Smartphones and surf the web are more likely to be forgetful, have trouble focusing, and lack awareness of their surroundings—even when they are not fixated on the internet. Also, about 80 % of teenagers’ auto accidents occur while the driver is distracted by his or her cellphone. Ain’t technology grand?

Wow, if ya happen to be visiting New York, be sure to drop down to Times Square where some resourceful young gals, known as “denudas,” paint their breasts red, white, and blue and pose for photos with tourists for tips. This activity would appear to be just good, clean fun, but although New York law permits both men and women to go shirtless, the authorities are considering eliminating the pedestrian plazas where the “denudas” operate.

Ho, boy, our pampered youth sure seem to want to get in on all the fun, too. Here’s a young lad at the elite St. Paul’s prep school in New Hampshire facing a prison sentence for having sex with a minor, barely escaping a “rape” conviction, during the prestigious school’s “senior salute” tradition. Not to be upstaged, frat boys down at Old Dominion University in Norfolk, Va. hung “welcoming” signs from their Frat House with quaint sayings, such as, “Freshman Daughter Dropoff”, “Go Ahead and Drop Off Mom, Too”, and “Hope Your Baby Girl is Ready for a Good Time.” Nice playful kids, all. Can y’all get an inkling of what old pappy and I are talking about in my blog #18, Our Military and Defense Industry, posted on the Fourth of July, 2014, when we mentioned that reviving the draft might benefit the rich kids by reminding them how fortunate they are, and maybe even instilling a tad of humility in them.

Say it ain’t so! A growing number of New York City women are having Botox injected into their scalps so sweat doesn’t ruin their hairdos. The $1,500 treatment, known cheerfully as Blowtox, involves about 200 Botox injections across the scalp. The injections stop nerves from activating sweat glands, so a Blowtoxed gal can sweat up a storm at the gym, and emerge with her hair still looking perfectly blow-dried. “It’s common for SoulCycle people”, said dermatologist, Dr, Patricia Wexler, “SoulCycle is infamous for killing the hair.” Bet ya didn’t even know what SoulCycle is, did ya?

Chris Borland walked away from pro football to save his brain. He estimates he suffered about 30 concussions during high school, college, and in the NFL. He says that he can barely watch the game now, “it’s like a spectacle of violence for entertainment. And you’re the actors in it.” His decision to quit made him a pariah among fans and players who’d rather pretend the danger he fears doesn’t exist. “In a lot of circles, especially within football, I’m the soft guy,” he says, “but I’m fine with being the soft, healthy guy.”

Old pappy swears that if he and I were into Conspiracy Theories, we’d believe all this stuff to be a Commie plot.

A recent poll claims to have found that 71% of Amurican voters are dissatisfied with the way things are going in the U. S. today, including 41% who are “very dissatisfied.”

In the words of the immortal Pogo (recorded on Earth Day, 1971, in the Walt Kelly comic strip while observing the accumulated trash in the Okefenokee Swamp), “Yep, Son, We have met the enemy, and he is us!”

Remember, folks, those rascal pols, ugly and deceitful as they may appear, are just a reflection of us!

Would you please check out that crazy old self-described democratic socialist, Bernie Sanders. Were he to be elevated to the highest office of our good old U.S.of A., he claims that he would ask Mr. Forbes’s billionaires to pay some taxes, and those glorious multi-national corporations which old SCOTUS has declared “people?” – he wants them to pay their taxes, also. All these burdensome taxes just to help support us old retired ingrates, maybe provide decent public education for all our kids, and even allow real old folks to eat a meal a day and see a doctor if they become ill. Why, he even advocates breaking up those “too big to fail” banks, and reining in their reckless behavior which threatens the whole world’s financial systems. You may find this hard to believe, but that old fool has even intimated that “wealth and income inequality may be the great moral, economic, and political issue of our time!”

What is with this man? Does he think someone espousing such crazy ideas can be elected to the Presidency of these mostly disgruntled states of Amurica?

Shucks, come to think of it, The Donald must agree with old Bernie. He was quoted recently saying, “They make a fortune, they pay no tax……The hedge fund guys are getting away with murder.” Matter of fact, those poor enraged crazies supporting Mr. Trump, if they knew what was good for them (which, of course, they don’t), would be clamoring for good old Bernie themselves!
Yes, Virginia, we need serious change, and we may not be able to wait for Santa Claus. Why not give old Bernie a shot at it?

Have ya had enough? OK, so long for now, Buster. 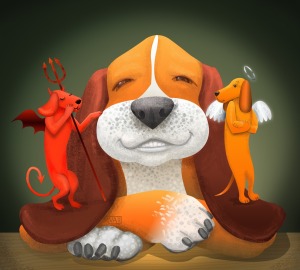 PS: (couldn’t help this one) Some poor Illinois Lottery winners are receiving IOU’s because the legislature there can’t agree to pass a budget!