Last week I promised that old pap and I would have a few comments on the 2015 class of the Forbes 400 Billionaires, and I aim to keep my word on that issue, as your beloved Telly explains, right after this important message.

The First Demoblican Debate, we believe, provided a rare contrast between the two parties, illustrating how far the Republicrats have drifted into making personal attacks on opponents and promoting irrelevant and often patently false accusations about everything under the sun.

The other night’s debate was conducted in a civil manner, allowing each participant the opportunity to express his or her ideas for encouraging a better future for our country. Having been instructed by the bellicose tone of the earlier Republicrat “debates,” this week’s “debaters” mostly stuck to the issues, avoiding the temptation to pillory one another.

Mrs. Clinton demonstrated her ability to deflect the unfavorable questions by the facilitators and display her very well paced (goodness knows she’s had lots of practice) stage presence. The media seems to have declared her the “winner” of the “debate,” though reportedly “social” media leaned more to old Bernie’s side. Fox “News,” of course continued their patented denigration of poor old “Hill,” and dismissed old Bernie as “a crazy man,” and laughed heartily at his ideas.

Bernie, for his part, performed for his first time on such a large, national stage as one might expect, not perfectly. However, his messages were very clear with virtually no ambiguity. The man speaks his mind without unnecessary nuance. The biggest applause of the evening came when he ended a familiar refrain which has haunted Mrs. Clinton for months by stating emphatically “Enough with the Emails.” Fox of course gave him credit for a very clever political move, saying, “it made him look authentic.” as though they’d know anything about authenticity. Old pap and I think the man just spoke what many of us have felt he has for months – the truth. Those clairvoyant folk at Fox believe that Bernie is not “credible enough to be a candidate.” Yikes, again, what do they know about credibility?

The former Mayor of our hometown, Charm City, and Governor of our revered State of Maryland, Martin O’Malley plugged the financial reform that old pappy and I recommended back on April Fools’ Day last year in my Blog #8 – The Financial Sector, reviving the Glass/Steagall legislation from the 1930’s.

Note: Senators Warren (D) and McCain (R) have introduced a bill to bring back Glass/Steagall. While old pap and I don’t believe its final repeal back in the Clinton administration was the only reason for the 2008 Crash, it was a major factor, and the original G/S law’s svelte length should provide a lean example for congress to offer unambiguous legislation.

The other two candidates seemed a tad out of place in this setting, but basically echoed the sentiments of the entire discussion – a very “progressive” platform.
NOW, THE FABULOUS FOUR HUNDRED:

ALREADY, here we are in October, and dear old Steve has published his (well, it used to be his) Forbes Magazine’s annual Ode to Greed. Yes, again y’all can read (and weep) about the richest 400 boys and girls in our good old U.S. of A.

Old pap and I heartily recommend that you check out our little analysis from last October of the Class of 2014 at Blog #30. It appears that the distribution of major wealth among the Class of 2015 stands about the same as last year, with financial dudes (plus a few gals) still (ugh) way out front. The cutoff this year was $1.7 Billion, up 10 percent from last year’s $1.55 Billion, leaving out 145 “poor” Billionaires. Yes, the rich are still getting richer, much richer!

The poor old Donald, that paragon of virtue who, as you must be painfully aware, is now one of the gang of Republicrat prez aspirants, gets no respect from the really rich guys. The mag allotted 7 pages to explain what a loser he is and how he thinks he’s much more wealthy than reported………they better watch out if he happens to land on his tootsies in the Rose Garden!

There were those who, either by having bad luck, or by moving on to their well-deserved rewards dropped out of the distinguished group, and were replaced by 35 bright-eyed and bushy-tailed newbies.

Perhaps the less said about this charming gang of over-achievers, the better!

A THOUGHT FROM THE PAST:
“Who are to be the electors of the federal representatives? Not the rich more than the poor.”
—James Madison 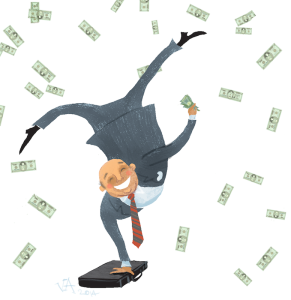