As practiced here in the good old US of A, it is sort of a cross between a conundrum and an oxymoron.  It is certainly a problem with no apparent solution and there’s not a lot of care evident for your health.  Our healthcare system would be more accurately called a sick-care system!  Until very recently there has been very little emphasis on keeping us healthy, and efforts in that direction are still meager and also not particularly emanating from the medical profession.

Basically, we go to the doctor when we feel ill, and a good percentage of the time the doctor will prescribe some medication to make us feel better.  Pappy just hates pills!  Even when we go to a doctor just for a routine “physical,” invariably the doctor will discover something in our lab work or EKG, or somewhere else which causes him or her to recommend we begin taking some form of medication to alleviate what is perceived to be a potential problem in the future (eg. statins to reduce cholesterol).

Our emphasis on prevention probably won’t come from the medical profession since it would be unusual for any workers to promote reducing their incomes.  So, if the benefits of staying healthy are to be championed, it must be through education and government actions.  Vaccinations are a very successful example of government action, yet due to lack of education, or inaccurate information, there have been efforts to stop them.  If government bans on advertising of tobacco products seem to be working, would it be advisable to consider forced abandonment of TV drug ads?

So, emphasis must be placed on teaching good health practices in our public school curriculums, the earlier the better.  Kids need to know the health benefits of exercise and good diet.  Can you believe that there are school districts which eliminate playground activities for the kids, usually due to thinking there’s not enough time for them, or even because of fear of lawsuits if kids are hurt?  Annual physicals and eventually tests such as colonoscopies need to be promoted, probably best through government health education programs.

Our health care system is one of the most expensive in the world (but the benefits are not at the top of the list).

There are, of course, numerous ideas about why it is so costly, but pappy and I think there are really only three major factors:  drugs and replacements parts, diet and unhealthy habits, and what pap likes to term, “our unnaturally extended longevity.”

My pappy is a lucky old fool in that he has now passed some 78 winters and until he had a little mishap a month ago, he was drug-free!  While his health has been good, he has been prone to falling down and hurting himself.  When he was two years old, he got a new wagon (born in December, they used to combine birthday and Christmas, and you got a little better toy) with which he proceeded to break his right femur.  As a teen, he fell off his bike and broke an arm, and last month he tripped and broke his left hip.  This event woke him to the cost of replacement parts – his new hip may cost about 100 thousand dollars.  He just read a timely article titled, “What’s a new hip cost?  Surgeons have no idea.”  Other articles note that the many parts now available are produced and sold at tremendous profit margins because there is not much cost control on the replacement procedures.

Legal drugs may be a bigger problem than the illicit ones.  Most 78 year olds (and many persons much younger) are regularly ingesting as many as a dozen different prescription drugs a day!  Of course, there are conspiracy theorists who are certain that the drug companies bribe the prescribers of their meds, and one couldn’t completely rule out such a marketing ploy when one considers how much they spend on advertising their wares.  Certainly, they do sponsor “educational” trips to wonderfully warm places in mid-winter just for the poor old docs!  A wonderful idea would be for everyone to begin ignoring those TV ads imploring us to, “Ask your doctor.”

Prolific use of legal drugs isn’t limited to old folks either – many young people, and even children, are prescribed drugs for a wide array of problems.  My Auntie works with children with physical and/or psychological problems, and almost all the kids coming to her for therapy have been on some kind of drugs.  She said her first task is to convince their parents to get them off the drugs.

In order to bring these astronomical costs back down to earth, it may be necessary for government to effect price controls in some areas until better education can work its way through the system.  Government can certainly help in two other areas – one of which deals with reducing regulations – the privacy notices seem to have no real world purpose and eliminating the requirement for them would save a few trees.  Also, tort reform reducing the high insurance premiums medical providers must pay against the probability of frivolous lawsuits would be a lovely idea.  Unfortunately, we’re going to have to replace a few of the lawyers in congress for this kind of improvement to happen!

Here’s an interesting “health scare of the week” from the Center for Disease Control and Prevention. Overdoses of prescription painkillers have become one of the leading causes of death among women.

Some one once said, “We are what we eat.”  To a large extent our diet does determine the state of our health, and even the fast food industry is finally beginning to admit the shortcomings of their offerings and are adding healthier meals to their menus.  Of course, people must be willing to change their eating habits to take advantage of the information on healthy diets as well as the fast food industry’s efforts to improve their fare.  Once again the solution is education.  My old pappy ascribes his very good health to good nutrition as a child.  He was born during the Great Depression, and in addition to establishing special work programs to get people back to work such as the WPA, the government distributed information on nutrition to new mothers as evidenced by the old handout displayed below: 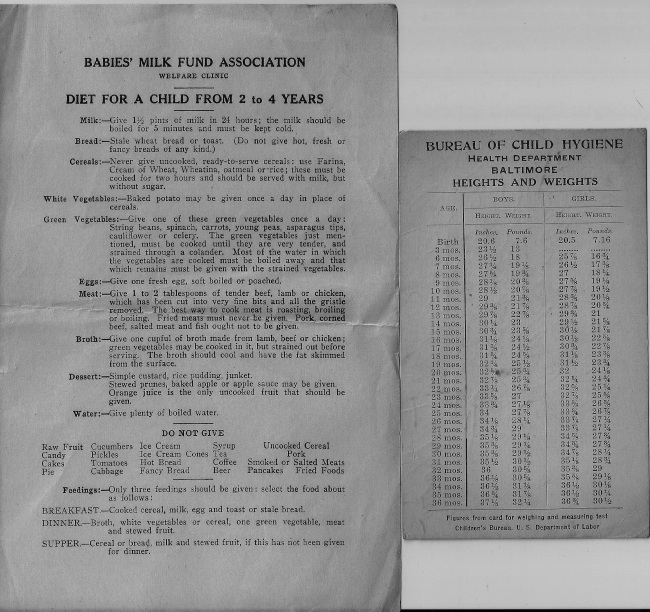 Currently, obesity is of epidemic proportions in our country and in other parts of the world.  25% of our adult population is considered obese and 50-60% overweight.  Unfortunately, parents have lost the notes on feeding their children in a healthy manner as well.  Sadly, some of our President’s detractors have even denigrated Michelle Obama’s efforts to reduce childhood obesity.  This is carrying partisanship a tad beyond the pale!  If the whole situation weren’t so terribly frightening, one would even find humor in the constant TV ads for weight loss programs.  Watching a few of these slick presentations, one wonders why every one of us isn’t looking as though we were  fashion models!

Compared to obesity, some other bad habits have less significance in determining future healthcare costs, but they are of course still important.  Smoking has been reduced significantly in recent years, but alcohol is still holding its own, and foolish youth related habits may be gaining (eg. tanning salons).  Young people, naturally, have always felt themselves to be immortal.  The problem with eliminating bad habits, as Mayor Bloomberg may have learned, is that their demise really can’t be legislated, it can only be achieved through knowledge and critical thinking.

A radio commentator who used to call himself “the voice of reason” once said, “people are now living way past their expiration dates.”  It was actually one of very few really “reasonable” things he ever declared, but this concept contains more than a morsel of truth.  Modern medicine can keep us alive almost twice as long as 100 years ago, although at tremendous costs.  In his one correct call, that old radio pundit was right on, and if you’ve known people wanting desperately to leave this world but unable to do so, you would have to agree with him.  However, the same old right-to-lifers, who by the way also very inconsistently rant for personal freedoms, would never agree that euthanasia should be legal.  Wouldn’t a reasonable person consider one’s own life a personal freedom?  Why should they, the government, or anyone else be able to tell us when we should be able to go to our reward, well deserved or not?  Some other countries, and even a few states here in the good old US of A, have made assisted suicide legal, at least with some restrictions – there really isn’t any logic for restrictions except for a person’s sanity and ability to understand their decision!

A big problem occurs from people not considering their end of life choices and wishes early on before they are incapable of making such decisions.  The now infamous “Death Panel” section of the Affordable Care Act, which never made it to see the light of day, would have aided the elderly in acquiring this critical knowledge.  Counseling, at all stages of life, helps people make better decisions.

My old pappy says, “Take your time and be very thorough about it, but as early as possible figure out what you want to do in your life.  Then, do it and having done it, get the heck out of the way!”

Besides just in case there is something over on the other side, pap wants to get there while he still has enough of his faculties left to be able to recognize it.  Then he’d like to come back and let everyone know so they can stop fighting about it!

The ACA, or as it’s detractors prefer to call it, Obamacare, is one example of how laws are passed in our dysfunctional legislative bodies, and it ain’t pretty!  This very important bill became law without a single Republican vote.  This is a singular shame because the bill incorporates many ideas which were first advanced by the Republican Party, and it in many respects parallels the Massachusetts health reform law which is lovelingly referred to as “Romneycare.”

While our healthcare system obviously screamed for reform, this was not a reasonable way to enact that reform.  The law almost certainly can be improved, and hopefully, now that the Republicans have all but given up on repealing it, the two sides can get together and effect improvements.

One thing is certain – as a nation of united states, we must find a better way to develop our laws.  Pap and I will discuss some thoughts on this need in a few weeks when our topic will be Government and Laws.

I broke ranks with Phil this year and forecast an early SPRING!