Yo, Buster here – I know – where the heck is my Beer news?  Well, I will be back with good Beer news, but today, I gotta mention a less good news story about the delicious suds.  As you know, if you’ve been reading my earlier folderol, my old pappy and I now reside in the great state of Idyhoe.  Now, Idyhoe certainly has its share of quirky oddities, but recently a local Beer producer, in an apparent dig at our illustrious Governor, “Butch” Otter, named one of their new brews “Little Bitch Otter” with a drawing of an Otter (the small furry critter) on the label.  In this old hound dog’s opinion, this action was not in particularly good taste (no reference to the pilsner itself).

It appears that this deed was meant to protest the Governor’s alleged stand against gay marriage.  Of course, any reasonably sane person would probably agree that if two gay people wish to share their lives together, they should be accorded the same legal status as any other “married” couple.  In fact, when two people want to be “married” in our good old U. S. of A., they must first obtain a license from their state of residence.  This is a civil action, and the resulting situation could then be called a “civil union.”  So, people having taken this step are entering a Civil Union for legal purposes.  Most religious people go a step further and get their religious facility to “marry” them.  Herein comes the rub, many religious people feel that the state of matrimony or “marriage” belongs exclusively to their religion.  They do usually extend the use of the word to accommodate most other religions as well, just not to same sex couples.

Nevertheless, wouldn’t it have saved an awful lot of trouble (in many cases, hatred also) if whoever it is who decides such things had just called the co-habitation for gay people a “civil union” with all the attendant legal aspects intact?  Unfortunately, it’s a little late in the game now, but when you stop to think about it, didn’t  we have enough to divide us without allowing semantics to add another burr under the saddle?  Come to think of it, it’s hard to understand why gay couples would want to call their relationships “marriage” given the manner in which a large number of such arrangements are currently conducted.

Speaking of divisions, there’s the nebulous matter of “conservatives” and “liberals.”  Have you recently heard of many conservatives conserving a great deal, or liberals liberating much?  It seems as though these two terms have come to be widely used to label people as to their political beliefs instead of what Mr. Webster envisioned for them.  Could it be reasonable to consider discontinuing categorizing each other, and instead begin discussing the many things that we as residents of the good old U. S. of A. have as common interests?

Well, enough of the wishful thinking for one day!  Back to those cheerful bankers:  Here’s a little note from the “Institute for Policy Studies.  Now, this outfit has been accused of everything from communist sympathies to a front for the KGB, but these numbers still seem reasonable enough, though their math gets real “fuzzy” on the comparison.

Wow, that’s an average of $162K over and above their annual salaries, and many get millions, while the minimum wage lads and lasses are making less than $15K for working all year!  All this inequality whilst the bankers are playing roulette with our 401K money!!  At least the minimum wage folk are usually providing some useful service.

If all this high finance chicanery aint scary enough for you, consider the fun gun rules being adopted by a bunch of States – the following excerpted from an article discussing state legislatures passing laws allowing guns in many places, but not in their statehouses:

Since the 2012 shooting of 26 students and teachers at Sandy Hook Elementary School in Newtown, Conn., 18 states have passed laws allowing guns in more places, including schools, restaurants, churches and public buildings.  The best antidote to violence, backers claim, is to have more citizens carrying weapons.  Yet only four of those states – Utah, Idaho, Mississippi, and Texas – extend that logic to their legislative chambers.

Lifted from a mag, used without credit: 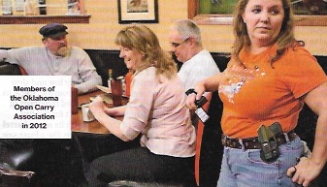 Gun owners in South Carolina and North Carolina no longer need to disarm when entering a bar.  In Arkansas, that right extends to houses of worship and religious schools with leaders who grant permission.  In April, Georgia passed legislation critics called the “guns everywhere” bill, allowing firearms to be carried in airports outside of security checkpoints.  In March, Indiana passed a law that allows firearms to be kept in vehicles on school property.  None of these states permit the public to carry guns into legislatures.

Are we having fun yet?

Hey, things could always be worse.  Consider dear old Sweden with its new reality TV show, “Troll Hunters.”  Its aim is to out anonymous Internet commenters who spew racist and sexist bile on Swedish sites.  It didn’t workout so well as some of the young men who were exposed became targets of a “tsunami” of hate themselves, some receiving death threats on Facebook and Twitter.  So, the show ended up contributing to the climate of intolerance that it was criticizing.  Once again, “Best laid plans of mice and men…..”  It aint easy being a cockeyed optimist anymore either, so pappy and I are gonna take another nap.

Closing on a high note (lifted directly from “The Week”):

A new YouGov poll found that only 4% of Americans think they are less intelligent than the average person.

Oops, apologies to my wonderful artist friend, VA, last week my pappy (the poor old fool) used the unfinished draft.  Doesn’t this one look even better??