I hope everyone my old pappy and I know will read this blog, especially if your previous teachers were a bit short on the history thingy.

Voices from the Margins

The first thoughts that came to mind when I read the headline “The Deadliest Mass Shooting In U.S. History” (Huffington Post) were about the Wounded Knee Massacre in the winter of 1890 (Wikipedia). To be sure, the senseless murders of people in Orlando, Florida, because they are somehow “different,” are tragic. We should grieve the loss. But this tragedy happened in an historical context, just like Wounded Knee. 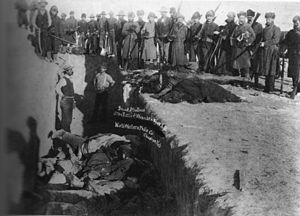 Photo: Mass grave for the dead Lakota after the conflict at Wounded Knee Creek (Wikipedia)

Fear and hatred of people because of sexual orientation have been deliberately manipulated in the current divide and conquer approach to deflect attention away from growing rampant corporate oppression. Just as fear and hatred against indigenous peoples helped unify a nation after a divisive civil war and give an idle military somewhere else to use their guns.