Old pap went to the “Flicks” with the sophomore grand monster to see the new film, “The Big Short.” My dear old pappy heartily recommends this motion picture to be seen by anyone contemplating voting for anyone except Bernie. The film attempts to translate Michael Lewis’ book (see my “cliff notes – Blog #24 – Are the Markets Rigged?) of the same title into “layman’s” terms. As is usually the case, the book is “so much better than the movie,” but the film gives one a reasonable idea of how the housing market “bubbling” allowed ethically challenged bankers to profit by “securitizing” mortgages and then ignobly manipulating those securities until they crumbled like a house of cards, crashing the whole housing market. Then, as we all know, the taxpayers had to bail out those feckless bankers before the whole world wide financial systems collapsed. Cleverly, at the end of the film, the screen indicates the number of bankers who were put in jail, quickly redacting, “Just kidding!”

The bankers were aided and abetted by the securities rating operations, and were certainly not corralled by the SEC or any other agency responsible for “regulating” their activities. That whole episode kind of blows some holes in the old “capitalistic” concept of “individual self interests combining to benefit mankind, an idea which has been around for a long time: “It is not from the benevolence of the butcher, the brewer, or the baker that we expect our dinner,” wrote Adam Smith in 1776, “but from their regard for their own interest.” It’s just possible that “self-interest” worked better in 1776 than it does now!?

BTW, The rascals are back at it today, making questionable loans to small businesses, and, you guessed right, securitizing them!

WHY SHOULD EVERY VOTER WATCH THE FILM (unless they’ve read the book, of course)? BECAUSE BERNIE IS THE ONLY CANDIDATE WHO WANTS TO REIN IN THIS TYPE OF OUT OF CONTROL BAD BEHAVIOR.

OH, THE UGLY REALITY OF POLITICS:

Dear old Hillary has worked hard to shed her old rep (one that was well-deserved, some say) as the “wicked witch of the west (wing?)”, but now the fangs are bared again for old Bernie. Calling him everything from a “gun nut” to a “socialist commie” (yeah, just like good old Newt and Carl do), she seems to be desperate in the effort to avoid a 2008 repeat performance.
SADLY – A Note on good old Fox “News” (hopefully to be rare on this blog going forward, despite its “comic” entertainment value):

This “newscast,” while being totally biased, is so comically stupid as to make it somewhat addictive, even to sane persons. A few days ago they had that dear old Speaker of the House, Newt Gingrich, expounding on the (as he sees it) “smartest team of candidates his Republicrats have fielded in his lifetime.” Just what the country needs now, a hefty gaggle of extremely bright con artists! If you need another good chuckle, old Newt also believes that the Republicrats are becoming the Party of “youth, diversity, and creativity.”

Next day Carl Rove, needing no introduction, is invited to provide ten minutes of Hillary bashing, about those emails, of course, and chuckling about the “too old,”
“socialistic commie,” Bernie.

Then, the other day, they started in the Blonde’s home with her puppy and little son and the pup’s trainer. One of the couch dudes asked if they allowed the pup on the furniture (the kid and puppy were tussling around on a long couch in the home). Her response, “oh, it’s ok, that’s just the doggie foyer!”

Well, of course, in keeping with their cultivated image as “Fox and Friends,” the puppy shows up on the TV couch – you should have seen that dear girl holding onto that puppy, having to uncross her legs to avoid toppling over, and struggling to maintain her “modesty!” 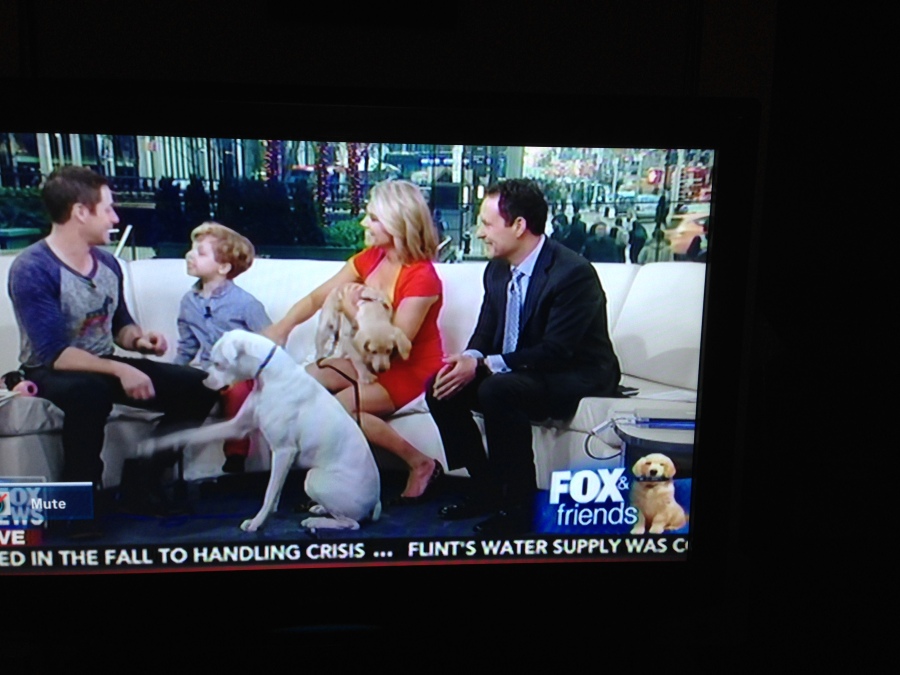 The disappointment on their faces was almost palpable when one morning all they could “report” on the “terrorist” scene, was the arrest of a couple of immigrants suspected of “plotting.” With little in the way of good fear-mongering grist, the poor souls were relegated to repeatedly bashing old Hillary about those “damned” emails!

Well, at least they were off President Obama’s case for a few minutes. We don’t believe a day goes by that they don’t joyfully criticize the old Prez about something, and we’ve never heard a good word about him from these lads and lasses.

This is the cable channel touting their “Fair and Balanced” reporting!