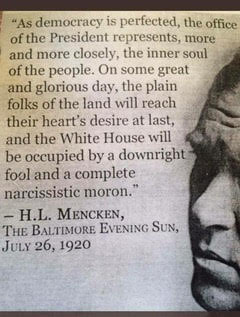 Pappy, we have fretted about the title for this lil blog for way too long, but I believe we got it!  We’re speaking of a menace which is so vulgar as to threaten all life on this poor old planet, and it isn’t the coronavirus, it is the one and only, T. Rump!  As set out in the illustration above, Henry L. Mencken, the old Bard of Baltimore, warned about the coming of this plague upon the land one hundred years ago.  This callous old Orange Monster must be some sort of alien being.  I’ve “heard” that no one has actually seen his birth certificate!
I’m sure you are correct, Buster, look at what he’s “accomplished” in just a tad over three years:  He has spent loads more money on our military which already had a budget larger than the combined war machines of the next ten countries, signed a tax cut for big corporations which they spent on stock buy-backs elevating the stock market to an unsustainable level, reduced spending on many programs which help working people and children, and generally exacerbated economic and cultural divides across our country, as well as destroying our alliances and relationships around the world.  Have I forgotten any of his magnificent “successes?”
Ho, Boy, pap, could a world-wide disaster come to the rescue of such a nasty old fool?  Our beloved old Moron was planning a couple potential mini-wars to tuck up his sleeve just in case either the Mueller report or the feckless Dumicrats were to catch up with him and his ruthless schemes.  So, who woulda thunk that a natural disaster would save him?  One that he at first dismissed as another left-wing hoax!  The fact that he wasted months with his ridiculous downplaying the coronavirus threat, flat-out lying about how well prepared his administration was for it, and how anyone who wants a test can get one allowed preparations to limit the extent of the problem to be put off and the virus to gain a stronger foothold in our land.  Also lost in his dithering approach to this forming disaster is the reduced funding he has directed for Medicare, the Centers for Disease Control, and other health-related functions and social safety nets over the past three years.
More recently, he has made his amazingly sincere teleprompter read to the nation, and is appearing daily on your beloved telly, reading notes about how he and his appointed expert, Mikey Pence, will direct the small band of experts he’s hand picked for loyalty to apply perfect efforts to marshal our wonderful system of disease control activities.  Why, suddenly, has he turned 180 degrees from calling the “foreign” virus a media hoax to respectfully launching a major attack on it?  We don’t think he’s smart enough to have seen this opportunity himself, so his son-in-law, that very uncharacteristically mean-spirited Jewish lad must have recognized a chance for the old Moron to finally appear to be acting “presidential.”
Bus, you better believe, he is there on the telly each and every day, preening like a peacock looking for a mate, and lying to beat the band about how he is directing massive efforts to defeat the coronavirus scourge.  Of course, he is so worried about his “wonderful” economy and stock market being in the tank and hurting his reelection that he is repeating a line he heard on Fox “news,” “don’t want to make the solution worse than the problem,” and wants to abandon the “war” on the coronavirus early so we can “get back to business.”  “If we only listen to the Docs, we’ll never go back to work.”  Remember, Bus, he’s a “very stable genius!”
Pappy, I hate to mention it, but he’s also tricked the congress into working another Bailout Bill.  Oops, I meant “economic stimulus package.”  This is looking to be a two trillion dollar addition to the National Debt, a pleasant little present for our youngsters.  Worse still, he’s steering it toward the “Ronnie Reagan trickle-down model.” Rather than helping the working and other poor, he wants them to give the money to, yep, the big ole corporations, so they can keep their people employed.  He’s even told those greedy old CEOs not to spend it all on stock buybacks (someone must have mentioned to him how they used his wonderful tax cut almost exclusively for that purpose).
Bus, I’ve heard people refer to the old Moron as a “son-of-a-bitch,” but it seems this would be an insult to some very decent animals, and then there are those who call him a “bastard,” which seems appropriate in one sense of the word, but could offend very nice people whose parents didn’t happen to have taken the wed-lock step.  See what ya mean, pap, it’s probably best to just leave it at his very descriptive given name, D. J. T. Rump.
If that clever fellow, Bill Barr hadn’t “hidden” Mr. Mueller’s report, we might not be is so much trouble today.  Mr Mueller tried to warn us about the threat of old Vlad Putin and the Russian interference in our elections.  He said, “Over the course of my career, I’ve seen a number of threats to our democracy, this Russian interference is the most serious.  What’s more, the hack continues.”  “They’re doing it as we sit here,” he warned the House Intelligence Committee.
That’s correct, pap. Gosh, if only there were only a way to get all our young people to understand what this administration is doing to the world they believe they will inherit!?!
It certainly appears our only hope is for enough people to happen to see the ugly display of the “Dark Triad” T-rump on the tv every day, so that they will want to run him out of town, tarred and feathered.
Note: If you weren’t a psychology student, look up “Dark Triad,” pappy did!