Prescient meme:  “When the historians look back at 2020, they will note that it was a miserable year, Kobe Bryant died, the world was plagued by the Corona virus, Australia was on fire, but the memes were great.”
Yo, pappy, are ya awake yet?  Beside all the bunk being disbursed by old T. Rump on the telly each day, there are reports of regular Amuricans stepping up to help their fellow inhabitants.  Here are a couple from yer fav rag, er, mag, The Week:  One fellow stood on a busy street with a sign saying, “Toilet Paper Exchange.”  Cars drove up handing him rolls, and he passed them on to cars needing them.  Also, there was a 7-year old Merryland first grader who used his $600 savings to buy cleaning supplies, etc., and distributed them at his grandma’s senior living community.  Another was a pizzeria in New Jersey where the owners took out a $50,000 line of credit to keep paying it’s employees for the next couple months.  Just like you’ve always told me, most people are good eggs!
Yes, Buster, I’ve noticed some positive “by-products” of this horrid pandemic, also.  If it leaves all of us having more empathy for their fellow human beans, those who don’t survive will not have died in vain.  It will have been a terrible price to pay, but in the current “era of Rumpism” drastic measures were called for, and with our govamint stalled (except for more deficit spending), it seems “Providence” had to step in!
Hey, pap. did ya happen to notice how some of old Rump’s pals are doing?  Over in the UK, crazy Boris had to give up on his plan to let most people go about their lives normally and use “herd immunity” to solve their virus problems, after a group of 200 scientists and doctors explained to him that it would cause hundreds of thousands of deaths and utterly collapse the health system.
Then, down south, that other “very stable genius,” Bolsonaro  is still encouraging the burning of the rain forests, and told Brazilians to go back to work and school!  Our poor old worn down Amuricans aren’t the only ones being negatively influenced by our Yuge Orange Monster!
Yikes, as you are fond of saying, Bus, here’s another cheerful item I run across often while researching for your blog entries: Ads for “Lip Filler…Long wearing and plumping lip liner with semi-permanent Micropigment Technology.”  Ain’t it reassuring to see that life isn’t completely shut down?
OK, Bus, Back to bizness:  Our “president” signed a massive ($2.2 Trillion) relief package on Saturday.  This gem, were the Repulsicans to have their way, would have gone mostly to the big Corps with their cheery CEO’s for another Ronnie style “Trickle Down” economic stimulus.  Fortunately, good old Chuck Schumer stood firm, and was able to get a bit of help out of it for us regular Amuricans!  Plus, he got them to add provisions for monitoring the largess going to the big corporations!  Naturally, the old Moron immediately informed us that he would not honor any decisions by the Special Inspector General set up in the legislation without his own very important and carefully thought-out review!  If only Rump were as smart as the Merryland 7-year old!

“For his entire adult life, and for his entire presidency, Tronald Dump, or T. Rump, whichever moniker you prefer, has created his own alternate reality, complete with his own alternate set of facts. He has shown himself to be erratic, impulsive, narcissistic, vindictive, cruel, mendacious, and devoid of empathy.”Quote from the “net,” which omitted one important character trait…he’s also a confirmed coward!  With this type of insane dude for our leader, the future is certainly not bright for our kids, and this yuge bailout will just add to our national debt, which we expect them to “handle!”

When I was in school, a fellow student asked the Prof. if the “national debt,” which at that time was a mere few hundred $billion, was a problem.  The Prof’s answer was, “Not if we own it!”  At the time, the debt was mostly owned by Amuricans.  Today, China and Japan own a $trillion each of our debt, which is kinda scary!  Hopefully, the old J. Paul Getty adage may still hold: “If you owe the bank $100, it’s your problem, if you owe the bank $100 million, it’s the bank’s problem!”

Pappy, as you know, a very large part of our population won’t understand any of this stuff.  When we did my very first blog, and decided to make it about Education, we had no idea of how poorly our system would hold up.  As old Tom Jefferson believed there was a direct link between the power of knowledge and democracy, we’re seeing the ill effects of our educational deficiency. 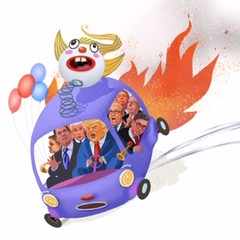 WHERE IS THAT DANGED CLIFF?